Catching the merger at work

A team of astronomers working with the VLTI from ESO resolved the dust shells around two emblematic stars : V854 Cen, and V838 Mon. In both studies, the international team led by Olivier Chesneau (Observatoire de la Côte d’Azur) discovered flattened dusty shells, which could be due to the merging of the two stars. It is the first time such dusty disks are resolved just after the merging of two stars.

Although there are more than a hundred billion stars in our Galaxy, it is extremely rare to catch two stars in the act of undergoing a violent interaction. It is even rarer to be allowed to document the aftermath of such a merger over several years to see what kind of an unique object is born as a consequence. New wide, time-domain, surveys are finding more and more of these objects. Nicknamed red novae, merging stars present themselves as bright explosions, which leave behind a large red star.

Astronomers have just obtained more and more information about merging stars thanks to the unmatched spatial resolution of the Very Large Telescope Interferometer (VLTI). Indeed, they now have pictures of two post-merger stars, in addition to one pre-merger system (HR5171, the « peanut » star), also studied by Olivier Chesneau1.

Observations of V838 Mon and V854 Cen confirm, for the first time in a direct way, that the merging of the two stars form a disk. This work has implications for the formations of bipolar nebulae. Indeed, the presence of dense material close to the equatorial plane of the systems can decelerate a wind or a fireball in these directions, leading to a bipolar outflow. These disk-like structures could also affect dust evolution, as dust evolves differently in the cooler and denser environment of a disk. 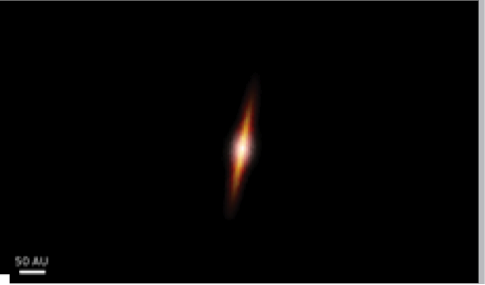 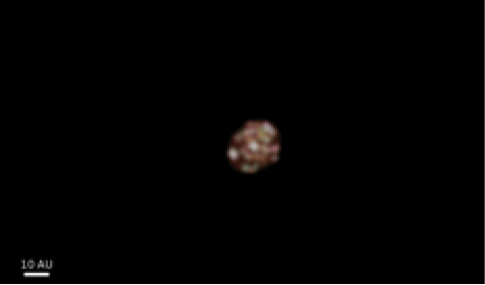 Left: Artist view of the disk in the core of V838 Mon as seen by AMBER/VLTI and MIDI/VLTI

V838 Monocerotis is an unusual stellar Frankenstein2, which could offer answers to some of the open questions about mergers. In early 2002, it burst into the limelight with a series of dramatic eruptions that strongly brightened the star. Scientific curiosity was greatly aroused when it was realized that these outbursts and the post-outburst evolution of the star were unique. While there are many classes of celestial object that undergo violent eruptions, such as novae, the eruption of V838 Mon did not follow any previously known path. After exhausting other possibilities to explain its eruption, the scientific consensus converged on V838 Mon being the prototype of a new class of objects, which are born out of stellar mergers. An already interesting object to begin with, V838 Mon’s popularity was increased to dizzying heights by the discovery of a spectacular light echo around it. The light echo, created from light of the multiple outbursts reflecting off the surrounding interstellar material, is a beautiful example of celestial pyrotechnics and has made V838 Mon an iconic object.

V854 Cen is a R Coronae Borealis star, an unusual helium star whose light decreases from time to time by a whopping 5 to 7 magnitudes. This light variability is thought to come from dust clouds that pass in front of it, eclipsing the light of the star. It is unknown where these clouds come from, nor how they affect the evolution of the star. Astronomers know now that these clouds are located close to the star, but how close is a matter of debate. V854 shows strikingly similar characteristics to the born-again Sakurai’s object, which experienced a helium flash a few years ago.

The work, divided into two papers is to be published in Astronomy and Astrophysics Letters. These two papers are the last from Olivier Chesneau, lead author of both papers, who passed away earlier this year. He also recently discovered the largest yellow hypergiant star among other results.